Once the design was completed and the financing set, the project was segmented into major contracts. They were: east and west anchorages and tower piers; approach river and land piers, embankments and superstructure; cables, suspenders and suspended steel erection; concrete deck; approach roadway; administrations building and toll booths.

The bridge foundation on the Delaware side was a caisson 95 feet by 221 feet. The actual steel structure had been made in a New Jersey shipyard and towed downriver in November 1949. The caisson was lowered into position and sealed with concrete. The concrete pour—27,000 cubic yards—lasted for a full week; the largest continuous pour up to that time. The New Jersey anchorage was a 99 foot by 225 foot cofferdam.

This photograph, taken on March 16, 1949, shows the very early stages of construction of the Delaware Memorial Bridge from an aerial view on the Delaware side of the river. Shown under way is Contract 3A held by Merritt-Chapman & Scott Corp. Across the river between the two plants is the area where the New Jersey approach roadway would be constructed.

This early photograph of the original construction shows the footings approaching the Delaware River on the New Jersey side. The Atlantic City Electric power generating plant is at the left of the photo.

Barges and cranes signal the beginnings of the construction of the Delaware Memorial Bridge. The barges removed the sand to make way for the footings and then brought in the huge amounts of concrete necessary for the underwater pourings.

This photograph was taken in November 1950. It shows work undertaken by the American Bridge Company, Contract #6. This is the New Jersey approach, showing construction completed to the anchorage.

Above water construction was massive; each anchorage block took 23,200 cubic yards of concrete and had to be delivered to the pour site by barge. Steel work for the approaches was delivered by barge although land-side steel arrived by train. Top-side construction began on both sides and moved toward the center at the same time.

While the deck paving moved ahead, work on the roadway approaches was also under way. On the New Jersey side the contract was held by the Whitting-Turner Contracting Co. Paving work on the Delaware side was undertaken by the James Julian Co. Concrete was poured over a grid of reinforcing steel in both contracts.

This photo was taken on October 16, 1950. Pictured is the construction of the foot-bridges to the center span. Construction on this phase fell under Contract #5 and was undertaken by the American Bridge Company.

American Bridge Company also held Contract #4. This April 22, 1951 photograph shows workers hoisting the closing section of the main span bottom chord on the south truss. Supplies ranging from sand and concrete to huge steel sections were delivered to the site by barge.

Barges and cranes signal the beginnings of the construction of the Delaware Memorial Bridge. The barges removed the sand to make way for the footings and then brought in the huge amounts of concrete necessary for the underwater pourings. By April 1951 the steel trusses on the bridge were connected and the last of the construction stages could begin: paving the roadway. Each of the four lanes on the bridge was 24 feet wide.

While the paving was under way, work was completed on the toll booths in anticipation of opening day, August 16, 1951.

The Governors of Delaware and New Jersey headed the procession of cars across the new bridge, at that time the 6th largest in the world. The first paying customer, Omero C. Catan of Teaneck, NJ, paid his one-way 75 cent toll at 12:01 a.m. on August 16, 1951.

By its second year of operation in 1952, the bridge carried 6.4 million vehicles and by 1966 the count had risen to 8.2 million annually, with growth continuing each year thereafter.

This photo was taken in 1957, six years after the Delaware Memorial Bridge was opened to the public in 1951.

Ironically, the success of the original span pointed to near-term problems. Traffic was rapidly approaching the capacity of the bridge.

A bi-state compact in 1962 leading to the creation of The Delaware River and Bay Authority reassigned responsibility for the bridge and gave both states an equal say in the discussion about a second bridge.

Construction got under way quickly with the ground-breaking held in mid-1964 and completion in the fall of 1968. Construction of the twin span took nearly five years, from the date of the agreement by the two states to opening day. Costs ranged well over $60 million for the nearly 20 contracts issued for construction.

The second bridge appears to the eye to be an exact twin of the original span, but there are subtle differences in the design and construction.

Not everyone agreed that the new bridge should parallel the first span. There were serious discussions about constructing a second bridge well to the south; however, the cost of building roads to a far-removed bridge was prohibitive.

After New Jersey agreed to build interchanges with the bridge for the Turnpike, as well as for US Highway 130 and a new section of I-295, plans for a parallel twin span moved ahead.

Although the technology had changed in the years between the constructions of the spans, workers still needed to spin the cables to make a suspension bridge possible. This photo was taken in July 1968 and shows workers on the cables. In the background, traffic on the original span passes.

This photo shows the second span under construction.

More than one billion vehicles have crossed the Delaware Memorial Bridge. Day by day, the total mounts.

The river's flow is timeless, while high above the water, the traffic flowing across the Delaware Memorial Bridge is seemingly as endless as the river itself 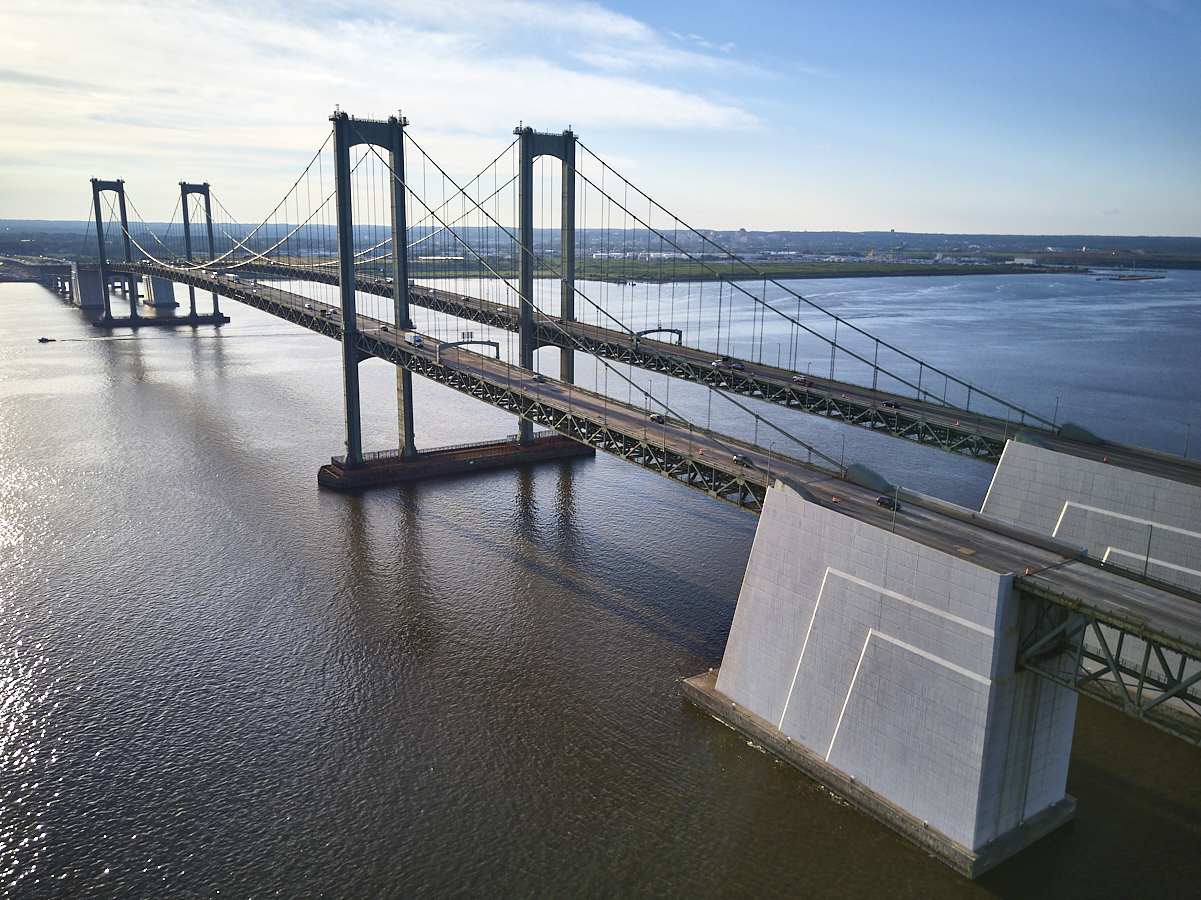